A downloadable game for Windows

Or something else entirely?

What secretive secrets lie secretly behind...

Evade the guards as you find the keys to the secret door in order to unlock it's mysteries. The game was made for the Guildford Gamejam, September 2018 (Theme: Secrets).

Space(Hold) - Put on your trusty cardboard box to evade detection.

As a fun secondary objective, see how many guards you can "Spin out" before being detected!

Extract Door.7z using 7zip, WINRAR or some other software. Run Door.exe to play the game.

I did not expect that was what was behind the secret door :O

This was a very well-made game, though letting the quit game button be escape would make sense and have it reset automatically or allow any button to reset after you get caught.  Moving from one screen to another was scary since I couldn't see where the guards were, and it caught me out a couple times.  However, the guards themselves moved very fluidly and were placed in such a way that it made the gameplay really enjoyably.  Their short vision ranges kept it from being frustrating.  The atmosphere was also wonderful, with the darkness and colored lights, and the intrigue music theme in the background. 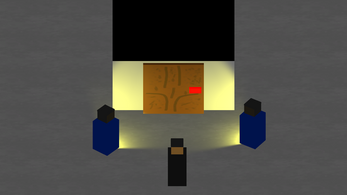